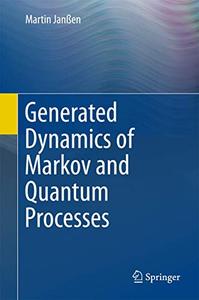 A further aim is to demonstrate that almost any subdiscipline of theoretical physics can conceptually be put into the context of generated stochastic processes. Classical mechanics and classical field theory are deterministic processes which emerge when fluctuations in relevant variables are negligible. Quantum mechanics and quantum field theory consider genuine quantum processes. Equilibrium and non-equilibrium statistics apply to the regime where relaxing Markov processes emerge from quantum processes by omission of a large number of uncontrollable variables. Systems with many variables often self-organize in such a way that only a few slow variables can serve as relevant variables. Symmetries and topological classes are essential in identifying such relevant variables.
The third aim of this book is to provide conceptually general methods of solutions which can serve as starting points to find relevant variables as to apply best-practice approximation methods. Such methods are available through generating functionals.
The potential reader is a graduate student who has heard already a course in quantum theory and equilibrium statistical physics including the mathematics of spectral analysis (eigenvalues, eigenvectors, Fourier and Laplace transformation). The reader should be open for a unifying look on several topics.