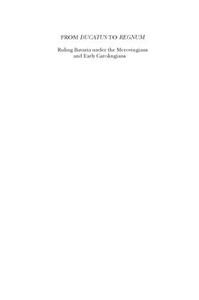 Bavaria was a very important country during the early Middle Ages. Its territory included much of the modern German state but also reached across the Alps into what are now Austria and northern Italy. Bavaria thus occupied a strategic position between the rival kingdoms of the Franks and the Langobards. It was ruled by powerful dukes who had close political and personal relations with the Frankish rulers but who also vigorously resisted attempts to limit their own sovereignty. Bavaria’s independence was ended in 788 by Charlemagne who deposed his cousin, Duke Tassilo. Charlemagne’s son, the Emperor Louis the Pious, then established Bavaria as the first monarchy east of the river Rhine for his own son, Ludwig the German. This is the first full study of the entire evolution of Bavarian rule from the mid-sixth century into the early ninth century. It explores the changing strategies adopted by its dukes and then its first king to establish their authority and maintain their autonomy in face of evolving challenges to their rule. An Epilogue continues the story into the early tenth century.

Carl I. Hammer graduated from Amherst College (B.A.) and the University of Toronto (Ph.D.) and also studied at the universities of Munich, Chicago and Oxford. After a career in international business with Westinghouse and Daimler-Benz, he is now retired. He has published two other scholarly books on early-medieval Bavaria and numerous articles in academic journals in N. America and Europe. He lives in Pittsburgh.