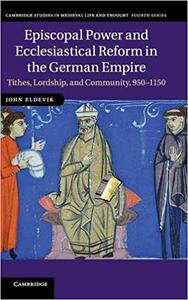 Focusing on the way bishops in the eleventh century used the ecclesiastical tithe – church taxes – to develop or re-order ties of loyalty and dependence within their dioceses, this book offers a new perspective on episcopacy in medieval Germany and Italy. Using three broad case studies from the dioceses of Mainz, Salzburg and Lucca in Tuscany, John Eldevik places the social dynamics of collecting the church tithe within current debates about religious reform, social change and the so-called ‘feudal revolution’ in the eleventh century, and analyses a key economic institution, the medieval tithe, as a social and political phenomenon. By examining episcopal churches and their possessions not in institutional terms, but as social networks which bishops were obliged to negotiate and construct over time using legal, historiographical and interpersonal means, this comparative study casts fresh light on the history of early medieval society.