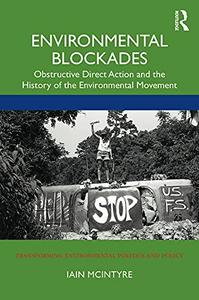 Since the 1970s, environmental blockades disrupting the exploitation and destruction of forests, rivers, and other biodiverse places have been one of the most attention-grabbing and contentious forms of political action. This book explores when, where, and why environmental blockading and its associated tactics first arose.

The author explores a broad range of questions, including how did tactics and practices first developed and popularised during environmental blockades come to feature regularly in animal rights, peace, refugee, and other campaigns? What are blockaders hoping to achieve? How have such blockades and tactics shaped government policy, the culture of modern politics, and popular understandings of ecology, colonialism, and activism? This book offers the first comprehensive history and analysis of environmental blockading in three key countries: Australia, the United States, and Canada. As the first places to experience sustained protest cycles which fully established, promoted, and developed the environmental blockading repertoire as an ongoing strategic option for movements nationally and internationally, these campaigns were central in creating a new approach to conservation issues. They also played a leading role in making obstructive direct action a regular part of political campaigning, as seen in the form of the Extinction Rebellion (XR), alter-globalisation, climate justice, and other movements.

This book draws on rigorous archival research including sources ranging from personal diaries, campaign minutes, and video footage through to police reports and newspaper articles, as well as interviews with more than 30 protest leaders and campaigners. It will be of great interest to students and scholars in the fields of sociology, political science, history, green criminology, and interdisciplinary environmental studies.