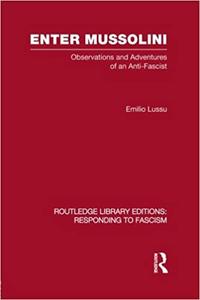 Emilio Lussu was an Italian MP and Professor of Political Economy, who was imprisoned because of his opposition to Mussolini. In 1929 he escaped with two fellow prisoners from the island of Lipari. Enter Mussolini combines an account of Mussolini’s rise to power and a critique of the Italian fascist movement that was influential at a time when many observers were still sympathetic to fascism, at least in its Italian guise. It was first published in English in 1936.