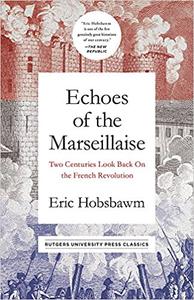 What was the French Revolution? Was it the triumph of Enlightenment humanist principles, or a violent reign of terror? Did it empower the common man, or just the bourgeoisie? And was it a turning point in world history, or a mere anomaly?

E.J. Hobsbawm’s classic historiographic study—written at the very moment when a new set of revolutions swept through the Eastern Bloc and brought down the Iron Curtain—explores how the French Revolution was perceived over the following two centuries. He traces how the French Revolution became integral to nineteenth-century political discourse, when everyone from bourgeois liberals to radical socialists cited these historical events, even as they disagreed on what their meaning. And he considers why references to the French Revolution continued to inflame passions into the twentieth century, as a rhetorical touchstone for communist revolutionaries and as a boogeyman for social conservatives.

Echoes of the Marseillaise is a stimulating examination of how the same events have been reimagined by different generations and factions to serve various political agendas. It will give readers a new appreciation for how the French Revolution not only made history, but also shaped our fundamental notions about history itself.