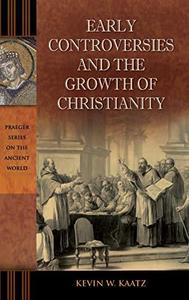 Drawing from primary texts, Early Controversies and the Growth of Christianity reveals how the religion was formed through a series of conflicts that occurred primarily between Christian groups. Presenting a close examination of the first four centuries of Christian history through the lens of the controversies that animated, disturbed, and finally formed the Church, the book will enable readers to become familiar with the lives and writings of the early Christians and to better understand the fascinating history of early Christianity.–The book focuses on several major early controversies. These include controversies surrounding the apostle Paul; controversies concerning the apostolic fathers, especially the idea of a pope and the role of the bishop/priest; Marcion and his influence; Manichaeism and Gnosticism; persecution and the Dontatists; Arianism; the rise of the bishop in the late 4th century; and power struggles between church and state. Each chapter focuses on the primary texts and key players in the battle over what would finally become orthodox Christianity, demystifying many poorly understood events that ultimately helped define today’s Church.