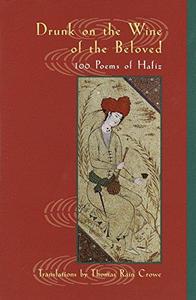 The Persian Sufi poet Hafiz (1326�1390) is a towering figure in Islamic literature—and in spiritual attainment as well. Known for his profound mystical wisdom combined with a sublime sensuousness, Hafiz was the supreme master of a poetic form known as theghazal(pronounced “guzzle”), an ode or song consisting of rhymed couplets celebrating divine love. In this selection of his poems, wine and the intoxication it brings are the image that expresses this love in all its joyful abandon, painful longing, bewilderment, and surrender. Through ninety-five free-verse renditions, we gain entry into the mystical world of Hafiz’s Winehouse, with its happy minstrels, its bewitching Winebringer, and its companions in drunken longing whose hearts cry out, “More wine!” Thomas Rain Crowe brings a new dimension to our growing appreciation of Hafiz and his wise drunkard’s advice to the seekers of God:In this world of illusion, take nothing other than this cup of wine;In this playhouse, don’t play any games but love.