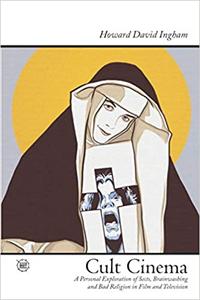 Religious extremism is one of our most acute current anxieties, but it has been with us for centuries. And from the birth of Christianity right through to the post-Trump era, it has always been tied to personalities and the cults they inspire. And the stories we tell about them reflect that. Cult Cinema uses cinematic and televisual depictions of isolated sects, self-help pyramid schemes, pagan village conspiracies, evangelical grifters and more to shine a lens upon what happens when belief goes bad. Drawing from sources ranging from situation comedy to exploitation horror and beyond, this book examines why people join abusive religious groups, what we really mean by “brainwashing”, and what it means to escape. Howard David Ingham has been writing about media, horror, the occult and the storytelling of religious belief for two decades. Their last book, We Don’t Go Back: A Watcher’s Guide to Folk Horror, was nominated for a 2018 Bram Stoker Award (Superior Achievement in Nonfiction). “A personal and cinematic journey through the strange and terrifying world of cults, this is a deeply honest and empathetic look at how people fall into – and escape from – damaging group dynamics. Cult Cinema is a breathtaking achievement…” Gwendolyn Kiste, Bram Stoker Award-winning author of The Rust Maidens