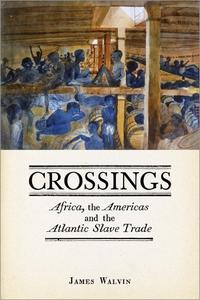 We all know the story of the slave trade—the infamous Middle Passage, the horrifying conditions on slave ships, the millions that died on the journey, and the auctions that awaited the slaves upon their arrival in the Americas. But much of the writing on the subject has focused on the European traders and the arrival of slaves in North America. In Crossings, eminent historian James Walvin covers these established territories while also traveling back to the story’s origins in Africa and south to Brazil, an often forgotten part of the triangular trade, in an effort to explore the broad sweep of slavery across the Atlantic.

Reconstructing the transatlantic slave trade from an extensive archive of new research, Walvin seeks to understand and describe how the trade began in Africa, the terrible ordeals experienced there by people sold into slavery, and the scars that remain on the continent today. Journeying across the ocean, he shows how Brazilian slavery was central to the development of the slave trade itself, as that country tested techniques and methods for trading and slavery that were successfully exported to the Caribbean and the rest of the Americas in the following centuries. Walvin also reveals the answers to vital questions that have never before been addressed, such as how a system that the Western world came to despise endured so long and how the British—who were fundamental in developing and perfecting the slave trade—became the most prominent proponents of its eradication.

The most authoritative history of the entire slave trade to date, Crossings offers a new understanding of one of the most important, and tragic, episodes in world history.