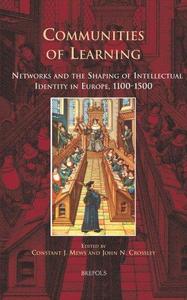 Communities of Learning: Networks and the Shaping of Intellectual Identity in Europe, 1100-1500 explores the fundamental insight that all new ideas are developed in the context of a community, whether academic, religious, or simply as a network of friends. The essays in this volume consider this notion in a variety of contexts and locations within Europe, from the pioneering age of translation activity in twelfth-century Toledo, when Jewish, Christian, and Muslim scholars came together to discuss Aristotle, to the origins of the University of Paris in the thirteenth century, and up to the period of great cultural renewal in France, Germany, and Italy in the fourteenth and fifteenth centuries. The collected essays bring together disciplinary approaches that are often discussed quite separately, namely that of the history of ideas, and the sociologies of both intellectual and religious life, with a view to exploring the multiplicity of communities in which ideas are pursued. Underpinning these various essays is an awareness of the delicate relationship between education and the diversity of religious practice and expression within Europe from 1100 to 1500. The collection emphasizes the fundamental continuity of intellectual concerns, which were shaped by both classical thought and monotheist religious tradition, but interpreted in a variety of ways.