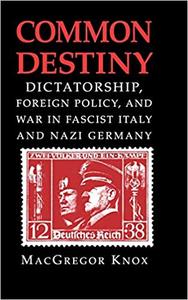 This book offers a genuinely comparative analysis of the dictatorships that launched the Second World War: their origins, nature, dynamics, and common ruin. It provides an unconventional and compelling overview from territorial unification in the 1860s to national catastrophe in 1943/45 that places Fascism and Nazism firmly in the tradition of revolutionary mass politics inaugurated in the French Revolution. Set within that overview are chapters analyzing Mussolini’s poorly understood foreign policy and the character and performance of the military instruments upon which success chiefly depended-the Italian and German armies. The chapter on the German army and the conclusion-which dissects the causes of the striking disparities between the two dictatorships in expansionist appetite, fighting power, and staying power-argue that a unique synthesis of Prusso-German military tradition and Nazi revolution propelled Germany’s fight to the last cartridge in 1943-45.