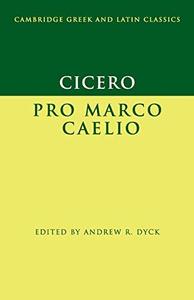 Pro Marco Caelio is perhaps Cicero’s best-loved speech and has long been regarded as one of the best surviving examples of Roman oratory. Speaking in defence of the young aristocrat Marcus Caelius Rufus on charges of political violence, Cicero scores his points with wit but also with searing invective directed at a supporter of the prosecution, Clodia Metelli, whom he represents as seeking vengeance as a lover spurned by his client. This new edition and detailed commentary offers advanced undergraduates and graduate students, as well as scholars, a detailed analysis of Cicero’s rhetorical strategies and stylistic refinements and presents a systematic account of the background and significance of the speech, including in-depth explanations of Roman court proceedings.