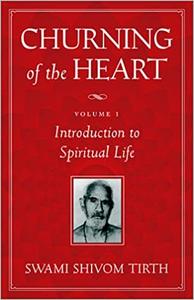 Churning of the Heart, Volume One is the first American edition of a work originally published in India 1999. The author, Swami Shivom Tirth, heads several ashrams, or religious communities, in India, and one in rural New York. This work, the first volume of a three-volume set, describes Shivom’s experiences as a young student of his guru, Swami Vishnu Tirth Maharaj. Sadhana Books will publish Volumes Two and Three in the Spring of 2002.
Introduction to the Spiritual Life, is drawn from Shivom Tirth’s first-year as a resident of the ashram of Vishnu Tirth in Central India. During this period, in 1960, Shivom acted as Vishnu Tirth’s personal assistant, accompanying him on daily walks each morning. This book records the content of their conversations. The format is in large part question and answer, as two great minds, young and old, disciple and teacher, explore the universal lessons of Hindu wisdom. Common experiences such as social conflicts and simple everyday decisions become the source of profound insights about the nature of reality. Shivom brings to the work a humble but determined curiosity, which lends to the discussions a simplicity and clarity that make them accessible to readers outside the Hindu tradition. Churning of the Heart is of particular interest to readers seeking authoritative information about the yogic tradition known as Shaktipat.