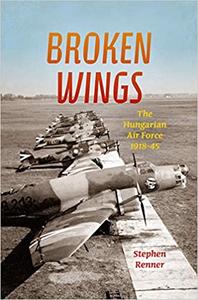 Drawing upon a wealth of previously untranslated documents, Broken Wings tells how a European nation built an entire air force in secret. Carved up and banned from having a military air service after World War I, Hungary became determined to rearm itself. In the early 1920s, Allied inspectors were evaded and obstructed at every turn; great efforts were made to stockpile equipment from the Great War; and the Hungarian government promoted the development of commercial aviation, partly as a front for military flight operations. The clandestine rearmament program could not depend on manufacturing at home but instead secretly accepted whichever planes Italy and Germany would sell them. During the late 1930s, the Hungarian air force went from operating as a secret branch of the army to an independent modernizing force in its own right. Hungarian air power played a great role in a victorious border skirmish with Slovakia in 1939. The cost of the reemergence of the Hungarian air force, however, was heavy: growing Nazi influence over the country, as Germany increasingly supplied aircraft and training. Inevitably, Hungary entered the Second World War on the side of the Axis in 1941, with its air force soon dwindling in independence and effectively becoming a Luftwaffe auxiliary force. Called back home to defend Hungary from incessant Allied bombings, the Hungarian air force ended the Second World War much as they had the First―salvaging aircraft parts from downed invaders and fighting until they no longer had airfields from which to operate.