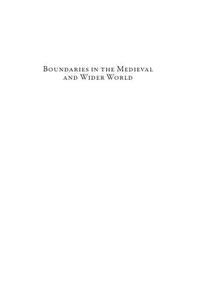 Throughout his distinguished career at Vanderbilt and Yale, Paul H. Freedman has established a reputation for pushing against and crossing perceived boundaries within history and within the historical discipline. His numerous works have consistently ventured into uncharted waters: from studies uncovering the hidden workings of papal bureaucracy and elite understandings of subaltern peasants, to changing perceptions of exotic products and the world beyond Europe, to the role modern American restaurants have played in taking cuisine in exciting new directions.

The fifteen essays collected in this volume have been written by Paul Freedman’s former students and closest colleagues to both honour his extraordinary achievements and to explore some of their implications for medieval and post-medieval European society and historical study. Together, these studies assess and explore a range of different boundaries, both tangible and theoretical: boundaries relating to law, religion, peasants, historiography, and food, medicine, and the exotic. While drawing important conclusions about their subjects, the collected essays identify historical quandaries and possibilities to guide future research and study.