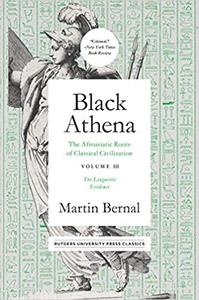 What is classical about Classical civilization?

In one of the most audacious works of scholarship ever written, Martin Bernal challenges the foundation of our thinking about this question. Classical civilization, he argues, has deep roots in Afroasiatic cultures. But these Afroasiatic influences have been systematically ignored, denied or suppressed since the eighteenth century—chiefly for racist reasons.

The popular view is that Greek civilization was the result of the conquest of a sophisticated but weak native population by vigorous Indo-European speakers—Aryans—from the North. But the Classical Greeks, Bernal argues, knew nothing of this “Aryan model.” They did not see their institutions as original, but as derived from the East and from Egypt in particular.

This long-awaited third and final volume of the series is concerned with the linguistic evidence that contradicts the Aryan Model of ancient Greece. Bernal shows how nearly 40 percent of the Greek vocabulary has been plausibly derived from two Afroasiatic languages – Ancient Egyptian and West Semitic. He also reveals how these derivations are not limited to matters of trade, but extended to the sophisticated language of politics, religion, and philosophy. This evidence, according to Bernal, greatly strengthens the hypothesis that in Greece an Indo-European-speaking population was culturally dominated by Ancient Egyptian and West Semitic speakers.

Provocative, passionate, and colossal in scope, this volume caps a thoughtful rewriting of history that has been stirring academic and political controversy since the publication of the first volume.