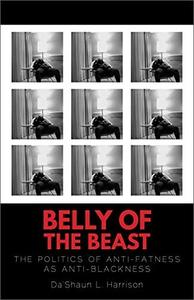 Exploring the intersections of Blackness, gender, fatness, health, and the violence of policing.

To live in a body both fat and Black is to exist at the margins of a society that creates the conditions for anti-fatness as anti-Blackness. Hyper-policed by state and society, passed over for housing and jobs, and derided and misdiagnosed by medical professionals, fat Black people in the United States are subject to sociopolitically sanctioned discrimination, abuse, condescension, and trauma.

Taking on desirability politics, the limitations of gender, the connection between anti-fatness and carcerality, and the incongruity of “health” and “healthiness” for the Black fat, Harrison viscerally and vividly illustrates the myriad harms of anti-fat anti-Blackness. They offer strategies for dismantling denial, unlearning the cultural programming that tells us “fat is bad,” and destroying the world as we know it, so the Black fat can inhabit a place not built on their subjugation.