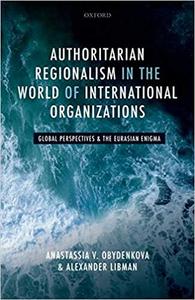 The interconnection between international organizations (IOs) membership and democratization has become a topic of intense debate. However, the main focus of the literature so far has been on IOs created by democratic states and comprised mostly of democracies, for examples the European Union.
In contrast to existing studies, this book focuses on another group of regional IOs, referred to as ‘non-democratic IOs’ which are organizations founded by autocracies.

How do these newly emerged organizations interrelate and interact with the outside world? How do they counteract and confront the danger of democratization in their own member states and neighboring states? This book aims to address these questions by developing a new theory of authoritarian
regionalism, and by combining both quantitative and qualitative analysis to test it. The quantitative analysis uses a large dataset of all regional organizations worldwide for the post-World War II period, with the aim of defining historical trends in development and the modification of regionalism
over the last seven decades (1945-2015). Qualitative analysis refines and develops the argument by looking at the case of post-Soviet Eurasia.

The book uncovers a new type of regionalism – ‘authoritarian regionalism’ and traces its historical roots as well as its implications for modern politics. The book is the first attempt to systematically investigate the functioning and the impact of authoritarian regionalism as a new phenomenon as
well as its implications for democratization world-wide. The book contributes to the theory of regionalism, international organizations, studies of autocracies, foreign policy, and democratization world-wide.