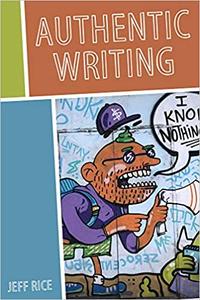 In typical academic circles, texts must be critiqued, mined for the obfuscated meanings they hide, and shown to reveal larger, broader meanings than what are initially evident. To engage in this type of writing is to perform an authentic version of scholarship. But what if a scholar chooses instead to write without critique? What if they write about travelling, their children, food, grocery shopping, frozen garlic bread, sandwiches, condiments, falafel, yoga, and moments that normally wouldn’t be considered scholarly? Can the writing still be scholarly? Can scholarly writing be authentic if its topics comprise the everyday?

In Authentic Writing, Jeff Rice uses this question to trace a position regarding critique, the role of the scholar, the role of the personal in scholarship, the banal as subject matter, and the idea of authenticity. He explores authenticity as a writing issue, a rhetorical issue, a consumption issue, a culture issue, and an ideological issue. Rather than arguing for a more authentic state or practice, Rice examines the rhetorical features of authenticity in order to expand the focus of scholarship.