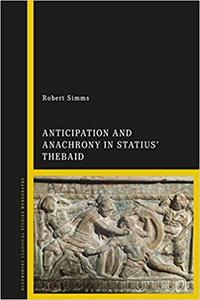 Applying the latest narratological theory and focusing on the use of anachrony (or ‘chronological deviation’), this book explores how Statius competes – successfully – for a place within an established literary canon. Given the tremendous pressure on poets to render familiar stories in unfamiliar and novel ways, how did he achieve this?

When Statius elected to sing of the quarrelsome sons of Oedipus he was acutely aware that this was a well-trod road, one frequently reproduced in a variety of genres – epic, drama and lyric poetry. Despite this highly varied corpus against which he sought to contend, he boasts that his epic has novelty and proudly declares that he is now counted among the ‘prisca nomina’, or ancient names, that sang of Thebes.

And indeed precisely the fact that there were so many story-versions (a greater number survive for comparison than for any other work from antiquity, rivaling even the popularity of the Trojan legend) means that the story is conveniently positioned to offer a unique exploration into how Statius creates a compelling story despite working within a saturated and overly familiar mythic tradition. This book argues that it is chiefly through the use of narrative anachrony, or non-chronological modes of narration, that Statius manipulates states of anticipation, suspense, and even surprise in his audience.