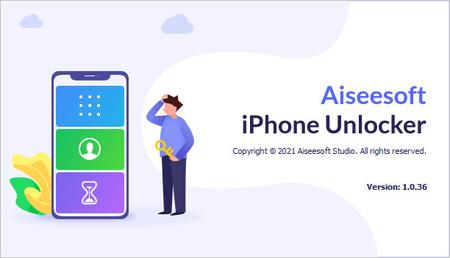 iPhone Screen Locked? Wipe iPhone Passcode Instantly
Creating a passcode for iPhone can protect your privacy. But there are various reasons for you to lose control of the lock screen passcode. How to get into a locked iPhone? Aiseesoft iPhone Unlocker will remove the various lock screen passcode from 4-digit, 6-digit, Touch ID and Face ID, and unlock the locked iPhone easily.

Forgot iPhone Passcode
Change your iPhone passcode frequently and forgot it? Find an old iPhone, but fails to unlock it with the passcode in memory? Mix up the password for many devices at hand? Aiseesoft iPhone Unlocker can remove the iPhone screen passcode easily.

Attention: While removing the screen locked passcode on iPhone, all the data and settings will be erased.

Forgot Apple ID or Password? Remove Apple ID in Seconds
Apple ID is a pass to accessing App Store, Apple Music, iCloud, iMessage, FaceTime, and more. If you forgot the Apple ID or password, you will lose access to many Apple services. Even trying the security questions and rescue emails in iForgot, but still fail to recover the password, you should try iPhone Unlocker. It can remove the forgotten Apple ID and let you change a new Apple ID account to activate your iPhone.
After Removing Forgotten Apple ID, you will:
– Fully control the iPhone without any limits.
– Access Apple ID features and iCloud settings.
– Not be disturbed by the old Apple ID sign-in.
– Not be tracked or found by the old Apple ID.
– Not be Erased remotely by old Apple ID.
– Backup iPhone with iTunes via iCloud or computer.

Attention
1. All the data and settings will be erased after removing the Apple ID on iPhone.
2. If Find My iPhone/iPad is disabled, you can unlock Apple ID on any device.
3. If Find My iPhone/iPad is enabled, devices running under iOS 11.4 are supported to unlock Apple ID directly. But for devices running on iOS 11.4 or later versions, to unlock Apple ID, the Two-Factor Authentication should be enabled.
4. Do not use Erase All Content and Settings feature or Restore iPhone using iTunes after removing Apple ID, because it will link to your old Apple ID and get stuck in iCloud activation.
5. Unactivated iOS device is not supported.