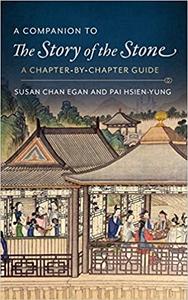 The Story of the Stone (also known as Dream of the Red Chamber) is widely held to be the greatest work of Chinese literature, beloved by readers ever since it was first published in 1791. The story revolves around the young scion of a mighty clan who, instead of studying for the civil service examinations, frolics with his maidservants and girl cousins. The narrative is cast within a mythic framework in which the protagonist’s rebellion against Confucian strictures is guided by a Buddhist monk and a Taoist priest. Embedded in the novel is a biting critique of imperial China’s political and social system.

This book is a straightforward guide to a complex classic that was written at a time when readers had plenty of leisure to sort through the hundreds of characters and half a dozen subplots that weave in and out of the book’s 120 chapters. Each chapter of the companion summarizes and comments on each chapter of the novel. The companion provides English-speaking readers―whether they are simply dipping into this novel or intent on a deep analysis of this masterpiece―with the cultural context to enjoy the story and understand its world.

The book is keyed to David Hawkes and John Minford’s English translation of The Story of the Stone and includes an index that gives the original Chinese names and terms.