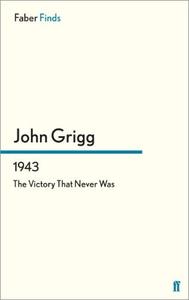 On June 6 1944 – ‘D-Day’ – Allied troops landed in France, opening a way to eventual victory. In this provocative reappraisal of the Second World War, John Grigg suggests that the Allied invasion could have been launched successfully in the previous year, reducing considerably the scale of the war’s human tragedy.

‘By 1943, Grigg notes, we already had air supremacy in the ETO and more than enough trained troops to launch a cross-Channel invasion; besides, with the Wehrmacht still deep in Russia, German supply lines would have been stretched to the breaking point. Had the Western Allies liberated only France and Belgium in 1943, speculates Grigg, they could have negotiated with Stalin from a position of strength.’ Kirkus Review