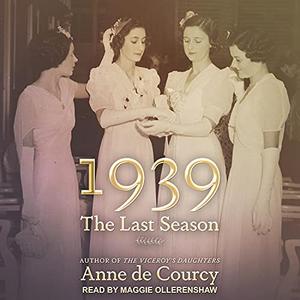 A wonderful portrait of British upper-class life in the season of 1939 – the last before the Second World War.

The season of 1939 brought all those “in Society” to London. The young debutante daughters of the upper classes were presented to the king and queen to mark their acceptance into the new adult world of their parents. They sparkled their way through a succession of balls and parties and sporting events.

The season brought together influential people not only from society but also from government at the various events of the social calendar. Prime Minister Neville Chamberlain chaperoned his debutante niece to weekend house parties; Lord Halifax, the foreign secretary, lunched with the headmaster of Eton; cabinet ministers encountered foreign ambassadors at balls in the houses of the great hostesses. As the hot summer drew on, the newspapers filled with ever more ominous reports of the relentless progress toward war. There was nothing to do but wait – and dance. The last season of peace was nearly over.